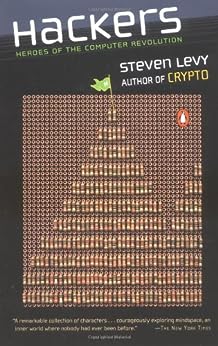 More by this author:

Hackers: Heroes of the Computer Revolution

Ask HN: Non-tech books that have helped you grow professionally?

DarkTree: The people who created the computing world

Ask HN: Books you wish you had read earlier?

Ask HN: What books have most influenced the way you see the world?

westoncb: Traces the major trends, personalities, and events leading to personal computing as we know it today, starting with IBM mainframes mediated by an IBM employ. Also describes the origin and meaning of the 'hacker ethic'. The hacker ethic, especially as exemplified by early MIT programmers in the book, was hugely influential on how I came to think about programming and creative work generally.

Ask HN: Recommendations on books and documentaries on tech companies/people?

rpeden: It's not too focused on specific people or companies, although you'll encounter some well known people like Bill Gates, Steve Jobs, and Richard Stallman in the book. It's an interesting read because it gives you a great background that helps you understand how we ended up with the tech culture and environment we have today.

Ask HN: What are your favorite non-fiction books of all time?

randcraw: “Hackers” is brilliant. No other book captures so well the iconoclastic adventurer spirit at the heart of the microcomputer revolution from '75 to '85.

Ask HN: What are more books like “Masters of Doom” or “Showstoppers”?