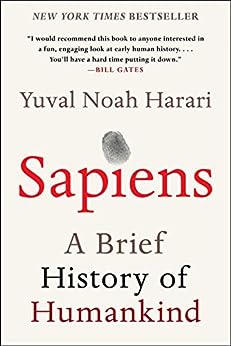 More by this author:

Sapiens: A Brief History of Humankind

Books recommended with this one:

Ask HN: Books with a high signal to noise ratio?

kashyapc: I wholeheartedly recommend -- it's remarkably well written and is full of very interesting perspectives.

Ask HN: What books fundamentally changed the way you think about the world?

antisocial: It has been helpful on two levels - 1. For my limited historical knowledge, it's a good crash course. 2. On a higher level, it explains why culture is a glue that keeps the wheels of any civilization spinning.

Ask HN: Which non-technology book has influenced you the most and why?

thewhitetulip: The book is simple mind blowing. It seems as if the entire history of homo sapiens which we learned in school was wrong. There was no slow progression, homo Sapiens and Neanderthals existed in the same time as did many ither species like homo erectus, but the perished before Sapiens.

simonbarker87: There's a section in there about how everything (well, most) in our world is essentially a figment of our collective imaginations that enough of us believe is true and as such it is reality. ...

Ask HN: Books you wish you had read earlier?

nindalf: It gave me a good understanding of where we, as a species, came from. What did we do, why did we spread across the planet, how did we replace other hominids?...

Ask HN: What books have made the biggest impact on your mental models?

adammcnamara: For understanding what it means to be human

yusufp: Taught me about how we've evolved as humans and how we haven't.

gallerdude: It’s been recommended to death on HN, but Sapiens is a really interesting look at the development of humans. It uses a lot of philosophy to explain things.

Ask HN: What are some interesting books you read in 2017?

somtum: An insightful book on the history of humankind and its possible future.

Ask HN: What books do you keep on your desk?

Ask HN: Which books have made you introspect?

joshbaptiste: Taught me that Religion, nation states, national pride etc.. are all imagined realities we all share to allow our particular country to thrive as a whole collective.

Ask HN: Which non-programming books are a beneficial read for programmers?

Ask HN: What's one book that changed your life?

fiveFeet: This book is a great read. It is about how homo sapiens became the most powerful species on earth. It changed the way I used to think about various things such as religion, capitalism, nationalism, race, gender, equality, independence etc.

joddystreet: Gave words to describe my feelings for various ideas in my head.

Ask HN: What are your favorite non-fiction books of all time?

pwillia7: It nearly broke my mind. It was on Obama and Bill Gates' reading lists that year and it is phenomenal. It's like one of those books that took some ideas I had been kicking around for years and blew the whole thing wide open.

Ask HN: What was the one book that you read and it actually changed your life?

bnchrch: Widened and shifted my understanding of the myths that make up our society.

WheelsAtLarge: ...is extraordinary on how well it summaries the human journey through time from the start. It never gets too technical but it's highly informative. It's 500+ pages yet it's hard to put down because it's so entertaining. I highly recommend it.

Ask HN: What books changed the way you think about almost everything?

air7: Hands down the book that most influenced me. The book had (for me) not one but several simple-yet-profound ideas that were forever inserted into the foreground of how I make sense of the world. For example, the existence of shared myths that allow humans to cooperate on a large scale. ...

nuclearghost: ...It really made me question a lot of assumptions I had about humanity and history. For example it's really not obvious that the agricultural revolution should have ever taken place considering the challenges associated with changing from a proven system for survival.

samjett: ...The book helped me to get perspective on current events and helped provide relevant historical precedent for almost everything in the world around us. ...

fillskills: It finally connected a lot of dots on how things work in the world (money, governments, religions, companies etc) and how humans communicate at scale.

davidgl: Great for a global view of our history, and an understanding of how important myths and religions have been for us being successful (as protocols for getting on)

Ask HN: Recommend one book I need to read this summer?

Ask HN: Best books you read in the past decade?

aprdm: Sapiens made history very interesting, I loved the idea behind our species being able to believe in the concept of a Created Myth( capitalism , companies, money, socialism, religion) as the main thing that made homo sapiens thrive. ...

ddsea: I really liked his views on transformation of happiness throughout history.

photon_lines: Great overview of how we got here and how our shared 'delusions' keep us where where we are